Icelandic Spar (also known as Calcite – Calcit – Calcite – Calcita ) Helgustaðir farther along the shore east of the village Eskifjörður, is world-famous. Polarizing light with Iceland spar from here, the 17th century Dutchman Huygens published discoveries on light as a phenomenon of waves. Evidence of former mining, Helgustaðanáma, makes a visit worthwhile, note all relics of the area are protected.

Classic doublespar crystals from Helgustadir on a recent stamp

Helgustadir is the name of a farmsite on the northern shore of the Reydarfjord in the outer east of Iceland. This deposit of outstanding transparent calcite was discovered in the 17th century and was intermittently mined for many decades until 1924. The transparency of the crystals where sufficient for the optical industry and therefore the calcite quickly became famous as “Iceland spar” and its marvelous crystals were rapidly distributed among the leading european scientists of that time. The initial concepts of double refraction and crystal cleavage planes were first discovered on calcite crystals from this site and led to a far better understanding of crystal physics. Iceland spar was used for all kinds of precision instruments, such as microscopes, until synthetic materials took over. The crystal has a double reflection of the light, which gives the illusion that you see everything double if you lay a clear crystal on a written text. The Dutchman, Christian Huygens, researched the crystal very thoroughly and put forward the theory on the wave movement of the light at the end of the 17th century in a very rare book called “Tractatus de Lumine”. The calcite crystals, which are accompanied by small tufts of stilbite crystals reach a size of several meters. RÖSLER (1981 : Lehrbuch der Mineralogie) quotes a maximum size of 6 x 2 m , but dont give any more details. Other authors describe 7 x 7 x 2 m large crystals. A crystal of 230 kg is said to be on display in the exhibition of the Museum of Natural History in London (yet unconfirmed). Today there remain large dumps of the former mining activity, whereas the mine as such is most of the year filled with snow and more or less inacessible. It is still possible to find small cleavage pieces of double spar calcite on the dumps, especially after periods of rain, which is not a rarity in Iceland. However collecting is forbidden by law, as Helgustadir was declared a national heritage site in 1975.

Documents: Iceland Spar: The helgustadir Calcite locality and its influence on the development of science (PDF) 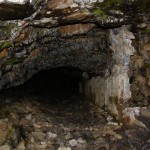 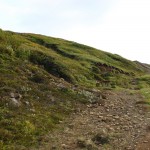 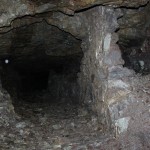 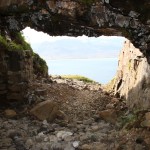 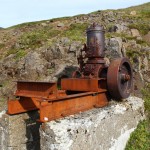 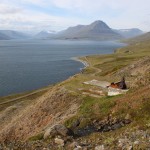 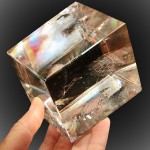 Helgustadir mine on the right, Seen over Reydarfjordur and Eskifjordur on the far right 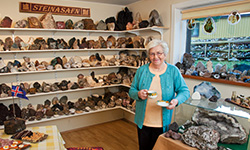 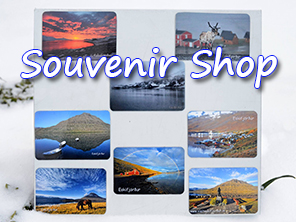